An Evening of Delightful Music by Pandit Vishwa Mohan Bhatt 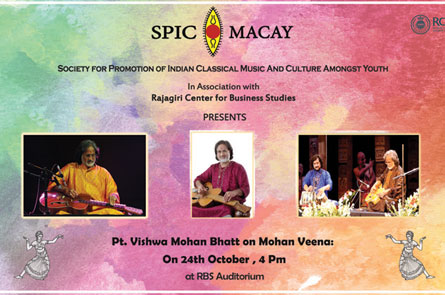 The 24 th of October 2016 will be an evening where Rajagiri Centre for Business Studies, Kakkanad, Kochin will be delighted in the music played by Grammy award holder, Pandit Vishwa Mohan Bhatt. This is an initiative in  association with SPIC MACAY (Society for the Promotion of Indian Classical Music and Culture Amongst Youth) which is in line with their idea of spreading cultural heritage throughout India. The programme starts at 4 PM at Rajagiri Business School Auditorium.

Pt. Vishwa Mohan Bhatt is the creator of the MOHAN VEENA and the winner of the GRAMMY AWARD; he has mesmerized the world with his pristine pure, delicate yet fiery music. Being the foremost disciple of Pt. Ravi Shankar, Vishwa Mohan belongs to that elite body of musicians which traces its origin to the Mughal emperor  Akbar's court musician TANSEN.

Pt. Vishwa Mohan Bhatt’s electrifying performance has always captured  the audience whether it is in the United States of America, Europe, Gulf countries or his motherland India.