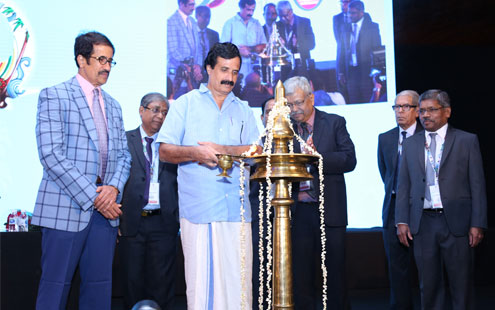 The four day 68 th National Cardiology conference organised by Cardiological Society of India (CSI) was inaugurated by Shi. C Ravindranath, Hon’ble Minister for education at Le Meridian convention centre today. Speaking on the occasion he stressed upon the need for a balanced lifestyle especially in Kerala where there is an alarming increase in heart related diseases. Around 5000 delegates from all across India and 200 from abroad are participating and presenting technical papers in the conference.

Dr.K.A Chako, Chairman, Organising Committee welcomed the delegates , invited guests, dignitaries and media persons to the conference. Dr. M.K Das, Hon.General Secretary presented CSI report for the year. Dr. Santhanu Guha, President, CSI presided over the function and congratulated and thanked the Kochi chapter for the outstanding preparations and arrangements made for the conference. The president elect Dr.H.S Hiremath outlined the future plans of CSI.

A book ‘Know Your Heart” edited by Dr. Geever Zacharia with articles written by 143 cardiologists from Kerala was released by the Minister.

Proposing Vote of Thanks, Dr.K.K Mohanan thanked the delegates and the invited guest for their support and whole hearted co operation.