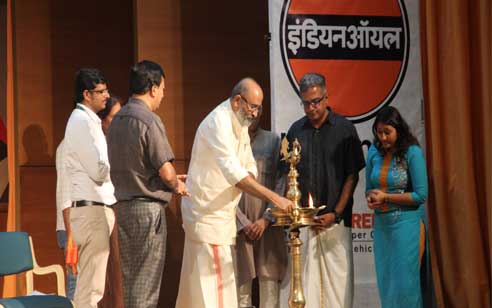 SPIC MACAY (Society for the Promotion of Indian Classical Music and Culture Amongst Youth) is a non-political, nationwide, voluntary movement founded in 1977 by Dr Kiran Seth, Professor-Emeritus at IIT-Delhi who was awarded the 'Padma Shri' for his contribution to the arts in 2009. In recognition of its contribution to youth development SPICMACAY was awarded the Rajiv Gandhi Sadbhavana award in 2011.

A state convention is an event called for in order to involve Chapters of particular state and to assess the progress of the 'movement' at the state level. This year's Annual State Convention SARGAM-18 is being hosted by SPICMACAYS Cochin nodal centre Rajagiri Centre for Business Studies, Kakkanad from January 26 th -28 th , 2018. The Title sponsors of the Convention is Indian Oil Corporation and Cochin Shipyard.

The first day 26, at 11 am traditional art forms such as Edakka performed by Thrippunithura Krishnadas, Panchavadyam, by Chottanikkara Subhash Narayana Marar, and Chakyarkooth by Ammannur Rajneesh will be showcased.

The convention will be inaugurated by Min. Adv Mathew T .Thomas, Minister for Water resources at 6 pm The inauguration will be followed by a concert by Pt.HariprsadChaurasia,on the bansuri and Oddissi Performance by Smt. SujathaMohapatra.

On Second Day January 27 th , a talk by historian & writer KG Paulose, will be held in the morning. In the evening from y 6:30 – 9 pm there would be a Carnatic violin concert by Dr. L Subrahmaniam and followed by Bharathnatyam by Smt. MeenakshiSreenivasan.The chief guest for the valedictory function is the collector Shri. K.Mohammed Y Safirulla IAS. The convention will come to close with a sitar recital by UstadShahedParvezKhan at 3:30 pm.

During the three days there will be workshops held for students on Koodiyattom,, Hindustani Vocals, Carnatic Vocals,Oddissi, , Mohiniyattom, Cherial Painting and Mask making,Pottery, Kathakali, Mural Painting for three hour training session each day.

SPICMACAY's intention is to enrich the quality of formal education by increasing awareness about different aspects of Indian heritage and inspiring the young mind to imbibe the values embedded in it.It seeks to inspire youth through experiencing the mysticism embodied in the rich and heterogeneous cultural tapestry of Indian and World Heritage, with a hope that the beauty, grace, values and wisdom embodied in these arts will influence their way of life and thinking and inspire one to become a better human being. For this, the most accomplished artistes of the country render programmes of Indian classical music and dance,folk, poetry, theatre, traditional paintings, crafts & yoga primarily in schools and colleges.