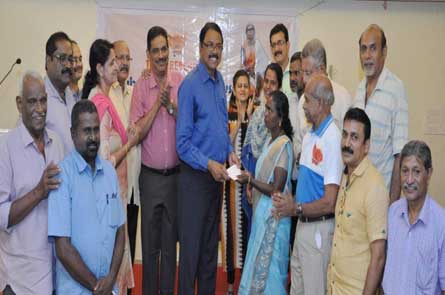 Kochi: When the recent floods played havoc in the life of a yesteryear's basketball star, a group of former basketball stars came together to help their contemporary. It was to K. Krishnamma (53), a former state junior basketball player, a resident of Kunnumma village near Thakazhi in Alappuzha, who was ended up in a relief camp in the recent floods that an association of former basketball players titled TEAM REBOUND has decided to support with a financial assistance of Rs.3 lakh.  First part of this, comprising Rs.50,000 was handed over the Krishnamma at a function held at Rajeev Gandhi Indoor Stadium today. Mr. Mohammed Iqbal, President, Team Rebound said home appliances worth the balance amount will be given away at the time of the house warming of the new house. The function was also attended by Leelamma Santhosh, Vice President; Ajikumar Nair, Secretary; Navas, Secretary, Regional Sports Centre; Salim, Senior Vice President, Kerala Basketball Association and Jaison, President, District Basketball Association.

The floods had damaged the family's small house including various utensils and amenities. The documents of the house were also irrevocably destroyed in the floods. As her husband S S Prakash is a cardiac patient, the family was now depending solely on Krishnamma's small earnings as a cook at the Govt UP School in Thakazhi. However, Krishnamma is not able to do the work right now as she is taking rest after she had had a fall during the floods.

In the relief camp, Krishnamma was a real relief and source of joy to its children inmates with the shots she made at the basketball court in the school where the relief camp held. She had her place in the state team for three times but could not represent India though she was selected to the national team once due to sickness. In the National School Meet also, she had represented the state.

Team Rebound also gave their assistance to Shiji Poulose, a former state senior player. The Association gave away Rs.50,000 to Shiji to replace the household equipments destroyed in the floods. The office bearers of Rebound said the association is attempting to help all the basketball players in the state who might have affected by the recent floods.